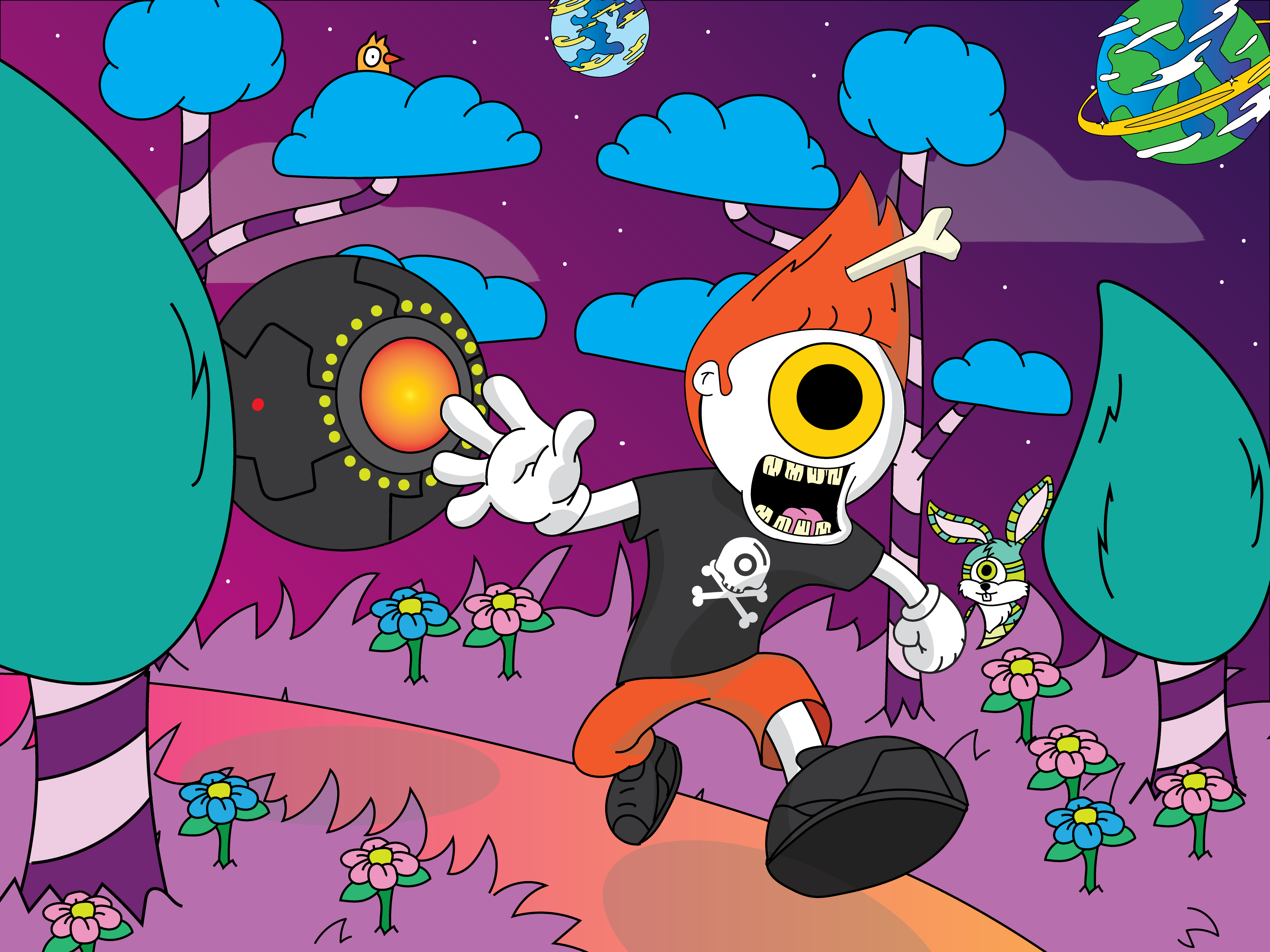 The Blinkless are a civilization of aliens who live in the depths of space on a planet called New Cornea. One day, their scientists discovered a burst of radio activity coming from a solar system far away. The solar system they found contained a planet called Earth, which was the source of the transmissions.

They were able to descramble the radio waves and discovered radio shows, television, movies, phone conversations and social media feeds. They quickly became infatuated with the people of Earth.

Their society shifted, and they began to model their behavior, social systems, and economies after the Earthlings. Their surface-level perspective, though, meant they got a lot of things wrong.

The Blinkless illustrated universe allows us to laugh at ourselves through the perspective of the aliens who view us through the lens of our media.

But it all began with the Ancients...

Long ago, in the depths of space, there was a society of ten-eyed beings. Now almost forgotten they are known only as ‘The Ancients’. As any budding society would, they began to explore their planet and themselves, developing complex language, arithmetic, and organized belief structures.

They were intelligent with a thirst for the unknown and quickly became a space-bound civilization. Their constant longing to understand the misunderstood would be their greatest strength while also making them vulnerable to the undiscerning hand of the universe.

They ventured through space, cataloging plants and animals they discovered on distant planets. They found bountiful planets teeming with life, and barren wastelands without a trace. There were tall trees, small bushes, birds, reptiles, and bubbles - sometimes it was difficult to tell the difference between the plants and animals.

Eventually they discovered a rare tree in the galaxy they lived in.

The fruit was sweet, but sour. Eating it would give you energy, strength, and the ability to access the plane of existence where all knowledge was kept from the beginning of time. They called it Mudutu. They ate the fruit with no regard for the trees. Stripped bare and left to die, the trees grew smaller in number over time.

With their newfound discovery, their society flourished. Their mathematics, technology, laws, and beliefs all advanced beyond measure due to the knowledge they had unjustly acquired. The only problem was that it was brutal on their digestive systems.

To ease their discomfort, they started to extract the juice from the fruit, hoping it would have the same benefit, but the juice by itself failed to demonstrate the same effect as eating the fruit. Instead those who drank the juice were easily convinced of anything and became slaves to propaganda.

The corporations and politicians in their society seized the opportunity to both capitalize on the juice (as it was heavily diluted with anything they could find), and have a captive customer base who would buy anything with which they were presented. Once the first of them tasted the juice, they believed anything they were told and spread the word about how much better the juice was than the fruit. Their entire society grew to forget the fruit and genuinely believed the juice could solve all of their problems.

One day, an asteroid passed through the trade route used for Mudutu shipments and caused a cargo ship to divert course. The ship was looted by pirates and they took every last fruit that was bound for the Ancients’ home world, leaving no survivors. At home, their reserves were low and they quickly ran out of juice to drink.

An unexpected side effect, after the juice ran out they began to grow ill. It started with the oldest among them. Their dependence on the juice had grown so strong they could no longer survive without it. First, there was dementia followed by extreme fatigue, ultimately resulting in death. Millions died before the next shipment could make it to them.

The few that were left took the supply they had and diluted it further, venturing out into space to find new Mudutu forests still hidden amongst the stars.

They found a few trees scattered on random planets, picked their fruits, and noted their locations. Several of the planets were settled by the travelers and, over millions of years, the travelers evolved to take on traits conducive to their new host environments. The first settlement planet they found was a tropical planet they called “New Cornea”.

Two primary evolutions of the original Ancients occurred in the galaxy. On some planets, like New Cornea, they evolved to have only one eye. These creatures called themselves “Blinkless” for their unmatched ability to stare at the sun.

On other planets, the “Oculoids” evolved to have six eyes. This gave them a huge advantage over the Blinkless when it came to surviving in the wild but, like the Blinkless and the Ancients before them, they were dependent on the Mudutu juice to survive. The Oculoids were indebted to the Blinkless because the Blinkless had the only access to the Mudutu fruit. A Blinkless corporation, PillMart, sold the juice in stores, branded as “Super Juice,” and, as history likes to repeat itself, diluted it with anything they could find.

Without their own access to the juice from the Mudutu fruit, the Oculoids did everything they could to make the Blinkless happy. In fact, the Oculoids grew to love the Blinkless so much that they began mimicking their behavior, style, and culture. Their symbiotic relationship formed a strong foundation and gave them both extreme power in the galaxy.

Many hundreds of years after the Blinkless and Oculoids had become well established in their sector of space, an intruder emerged from a neighboring galaxy. The Grimlet home planet had been decimated by nuclear war and the last survivors sent out escape pods filled with their eggs. Millions of eggs were launched, but only around 1300 made it out of the solar system without being destroyed by warring factions.

The remaining escape pods made their way to the Blinkless galaxy and spread their payload across many of the planets, ejecting the eggs in batches and leaving them to hatch. The Grimlets were an aggressive species and, as the eggs hatched and grew into adults, they quickly dominated their own section of the galaxy, wiping out many millions of Blinkless and Oculoids in their path.

Today, the Blinkless and Oculoids live in peace with one another and struggle to protect themselves against the Grimlet invaders who have vowed to take over the entire galaxy. The Ancients are all but wiped out, with only a few remaining, clinging to the last of the Mudutu trees.

On New Cornea, the corporate interests of PillMart have ramped up the production of Super Juice, sending crews into space to locate any remaining trees they can find to keep the population alive and gullible - for a premium. The money left over from Super Juice sales, after executive salaries, is primarily reinvested in research and development in an attempt to locate more trees scattered across the galaxy. From time to time, though, the team tasked with locating the Mudutu trees will intercept strange, alien signals from the great unknown…

This will only take a moment...